Hello crafty friends! This weekend I worked on the current challenge on the Frilly & Funkie blog – Dare to Resist. The challenge set by Autumn was to use a resist technique in our project. The challenge blog is generously sponsored by the Funkie Junkie Boutique.

This weekend was one of those “calm before the storm” weekends. I don’t get them very often and I probably won’t have another one for quite a while. I managed to get a lot of stuff done including more of the reorganization and revamp of my new craft room. Like everything else, it has been a process and is finally starting to come together. It also helped that the Olympics were winding down so there was less time sitting in front of the fire on the computer watching some sports that I don’t normally get to watch anymore – anyone remember that you used to be able to watch all sorts of athletic events on the NBC Wide World of Sports?

For this challenge, I chose an embossing resist technique and relied on that technique to create a marbled background for my project. The background was a bit of an experiment and I wasn’t even sure it was going to look right or that I would be able to achieve the look I wanted. So, the background on the project is the experiment and I had no real intention of actually using it until I realized how much I liked it. I’m not one for using green as a main color so it was even more surprising to me that I liked it enough to keep it.

I started off with a canvas and used the Marbled Background stamp from My Favorite things. I stamped on the canvas in Versa Mark and used Gold embossing powder. Once I had the main embossed background, I used a Versa Mark pen to fill in some minor gaps in the placement of the stamp – the nice thing about the marbling is that it all can be easily joined. As I was just experimenting with the background, I figured I would also use a color paint I wouldn’t normally pick. In this case, I grabbed the one of top and it was the new Prima Finnabair Acrylic Metallique Paint in Golden Moss. I added some water to the paint and I was able to get the additional marbling effect by adding more paint to the water in stages and then adding each stage to the canvas. In some places I just let the water/paint pool.

At this point, I almost put the canvas aside. I looked at it and thought there wouldn’t be much I can do with it. I mucked around with several ideas – a set of gears, some insects, some butterflies, a travel journal with a map, and a fly fishing theme. The project almost ended there. And, then, I spied a Venetian Shutter from Frank Garcia’s Memory Hardware line. I remembered I had some Market 49 flowers that had a faint green tinge to them. First, I had to grab the wood glue and repair the shutter (it came out of the package in a couple of different pieces but it was easily fixed). As the glue was drying, I dug through my basket of flowers and found the Market 49 flowers I was looking for (and some additional Ecru ones to compliment) and thought they were the perfect compliment to the background. Yay! I love it when a project goes from stutter to puttering right along.

As it was coming together, I came to an almost screeching halt when I thought to myself, what would be inside the window? I grabbed one of the very old Tim Holtz stamps (I think it is from his classics line?) and stamped the dragonfly. There were the leftover beaded bits from the Market 49 flowers and I started to look for what could be the body of my dragonfly – a corked vial from Tim Holtz’s Idea-ology line. I stamped the dragonfly wings on Bundled Sage paper, embossed them in Gold Embossing Powder, and fussy cut them.

I put it all together adding some smaller white Cosmos Daisy Mulberry flowers, a Market 49 berry spray, a background using Forest Moss and Gold Glitter paper from Tim Holtz, and Tim Holtz Idea-ology Quote Chip inked in Bundled Sage Distress Ink. And, finally, I decided it needed a background to set it off so I used a bigger canvas and covered it in Canvas Corp. Brands chocolate fluted paper. 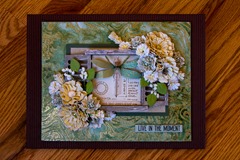 I really like this project! When I woke up this morning and looked at it in the daylight I decided it was a keeper. I hope you enjoy it and it inspires you to experiment a little too! I hope everyone has a lovely, safe week.

Donna, Wow! I'm so happy you persevered with this canvas, because it is so very pretty! I love that emboss resist marbled background; it sets off the framed dragonfly perfectly! Love your flower clusters and the vial used as the dragonfly's body-clever detail! I am delighted you played along with our Dare to Resist challenge at Frilly and Funkie! Hugs! Sara Emily

Goodness! I am so glad you persisted with your background, as the final result is GORGEOUS! I love the image tucked inside the shutter. Just so many delicious details, wonderful texture and total eye candy! Thanks so much for sharing with us at the Frilly and Funkie "Dare to Resist" Challenge!

I am absolutely crazy about this! That marble has me drooling and the layered dragonfly in his bed of flowers is outstanding! What a wow project, so glad you persevered! Hugs, Autumn

Gorgeous project with a lovely background. The dragonfly in the window looks right at home among the flowers. Thanks for joining us at Frilly and Funkie. Hugs! Cec

Back to say congratulations on being our winner at Frilly and Funkie! Your project is sensational! Hugs!