Happy mid-August crafty friends! As we wind our way toward September, in Colorado we are just at the height of Palisade Peaches where we get big, juicy, sweet peaches from the western slopes. Today I made a ginger peach pie which turned out rather lovely! As the pie was baking in the oven, I also decided to head to my craft room and work on a project for the latest challenge for Frilly and Funkie. The current challenge is about August and the challenge asked us to include marble and columns and the like. The challenge is essentially an ode to Augustus and August. The challenge is generously sponsored by the Funkie Junkie Boutique.

I started off this project by doing a bit of research on August and Augustus to see if it would spark something for me to create for the challenge. I found out that poppies are the “birth flower” for the month of August so I set out to find anything poppy related in my stash of goodies. I stumbled upon my DarkRoom Door Collage stamp and decided to try and use my Distress Oxide Inks to color it. Having already decided that I wanted to add some marble as the background, I started off with a marble background stamp from My Favorite Things and stamped it on a canvas board in Versa Mark Ink. I wanted to stay true to the marble color of black, greys, and white so the stamped image was embossed in Ranger Ink Embossing Powder (White). I then used the Finnabair Art Alchemy Acrylic Paint Sparks in Raven Black to “watercolor” my canvas. While I like the sparkle it added to the marble effect it wasn’t as workable as regular acrylic paints when you water them down so it’s not as uniform as I would like the range of greys in the marble. 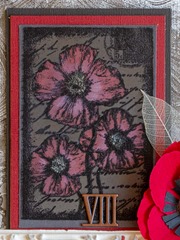 Next, the poppies. I stamped the image in VersaFine Black Onyx Black Pigment Ink and embossed it with Ranger Ink Embossing Powder (Clear). The background paper was a grey textured cardstock that I had in my stacks of paper. I grabbed my Distress Oxide Inks, took the plastic wrapping off of them, and decided to take the Distress Oxide Ink plunge. Yes, I know, it’s taken me a little while to get up the gumption to use them. I had no idea how this was going to turn out but I decided if it didn’t work I could go in a different direction with the same stamp. But, it seems that the image came out well for a first use. The colors I used for the stamped image are: Black Soot, Vintage Photo, Fossilized Amber, Candied Apple, and Fired Brick. I’ll have to keep working with the oxide inks to get the techniques down.

Once I started to lay everything down, I decided that the canvas needed some dressing. I found some extra paper clay pieces I made a while back. Since everything is so dry here, I have to use a whole package of the paper clay or it dries out and is useless. I’ve tried everything possible to keep the paper clay longer but, alas, the lack of humidity has resulted in several packages being tossed in the trash. I wanted to find a piece that was like the type of decorative reliefs on Roman buildings and found that I had a piece from the IOD Moulding I group. I broke it down to the size I needed and then to make it pop a bit, I brushed it with some Finnabair Metallique Wax in Brushed Iron. I didn’t want to mess with it too much because I liked the dried clay color.

I also decided to try and make a poppy flower. I grabbed my paper flower book that I bought in May and started my first-ever paper flower and let me tell you what a disaster that proved to be! Back to the drawing board I went and tried to break down the pieces of the paper flower instructions from the book. I made a marginal version but it was way too big and too long for the canvas. Not to mention it looked like marginally better than my first one but still not great. I needed to take a break and think about it so I went for a run. Yes, the pie was out of the oven and sitting on the cooling rack so don’t worry about it burning in the oven… 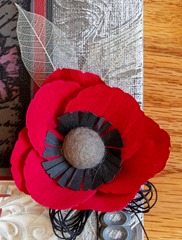 When the pup and I returned from our run, I decided to just go with the shapes I thought worked and see what happened. In other words, I free formed it!!! I started to go through all of my die cuts for a circle-type shape for the petal but something that had a bit of a ragged edge. In the end, I used the die cut from the Hero Arts Besties Stamp and Cut. It’s a circular-type die cut that is for a stamp that is a piece of wood so the edges of the die aren’t perfectly round. I shaped the die-cut shape into a cup by creasing and gluing the middle of it at the bottom. I then glue each petal to a round piece of chipboard that I used as the base. I worked slowly because I really didn’t know what I was doing but it worked! For the flower, I used some beautiful two-toned flower crepe paper that I found at a lovely paper store in Boulder (Two Hands Paperie). Their store window always has some type of artsy piece that was made during one of their classes and it was there that I decided I would try my hand at paper flowers. Considering how the “book learning” went, I might just have to sign up for a paper flower making class. The black center was black flower paper from Little B and the felt center of the poppy was from Benzie Design. I decided to add some bleached leaves that I had in my “miscellaneous embellishments” box. I decided against a green leaf as I thought it would pull too much from the rest of the canvas. 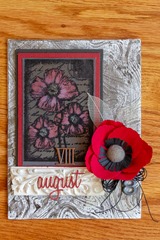 I hope you like my “August” project. August seems to be flying by already – the neighborhood kids will all head back to school next week, the nights are starting to get a little cooler, and the garden flowers are starting to look a bit worn. Fall is just around the corner. But for now, we’ll enjoy the last waning days of summer and enjoy some lovely peach pie!

I left a nice long heart felt comment, but I'm afraid it didn't take, so here I am again to say thank you for sharing with us at Frilly and Funkie!

I think what I said goes along these lines: Your canvas is beautiful! I love the marbled background and your thoughtful use of the poppies to tie into the 'August' theme. Gorgeous poppy; it was fun learning how it came about! Great choice of colors for this project; brilliant idea to use the white leaf! Hugs! Sara Emily

Sara: I have absolutely no idea what happened (or so my "web guy", aka husband, says to me): there is no trace of your comment, it wasn't even flagged into "purgatory" for some reason to be checked. I am so sorry it didn't take. But thank you ever so much for your kind words. D.

Love the marbled background. Also love how your researched August and found out about poppies. thanks so much for joining in the Frillie and funkie challenge!

This is stunning. Love the colour combo and all the embossing. Thanks for joining us at Frilly and Funkie. Hugs! Cec