Happy almost Halloween to everyone! The days are definitely shorter, the nights are noticeably cooler, and there is snow in the forecast for later this week. Right on track for Halloween….nothing like freezing temperatures and snow for trick or treating. <sigh>

I’m so excited to be a guest designer for the Trick or Treat challenge on the Frilly & Funkie blog. Welcome to those of you who are new to my blog and welcome back to those of you who visit! While Halloween and Autumn are one of my favorite times to decorate and be crafty, this month has been crazy busy and I didn’t get to any Halloween projects. I was hoping to do another version of last year’s Halloween mailbox but it’s now on the list for next year. So with this challenge I set out to get into the Halloween groove. The challenge was to create a trick or a treat in our project – it could be a hidden pocket or a new technique. I had a hard time deciding what I wanted to do and halfway through one idea I settled on another. The challenge is sponsored by the Funkie Junkie Boutique.

I started my project with a configurations box from Tim Holtz. I took out all of the smaller individual boxes and gave them a quick coat with Black Soot Distress Paint. I didn’t use gesso or anything because I wasn’t looking for the perfect look. I thought the paint over the box material had a bit more rustic and Halloween look.

The boxes did not take long to dry but I set them aside and went through my bits and bobs for how I wanted to decorate the boxes and I also picked out papers from the Tim Holtz Paper Stash “Halloween” and the Kraft Paper Stash “Halloween” that would be used for back of the boxes. I grabbed some Ideaology Mirrored sheets, some extra necklaces (which I pick up at my local craft store when they are on super sale), some lovely metal pieces from the Funkie Junkie. I kept digging around for my Tim Holtz paper dolls but couldn’t find them so I “settled” on his Halloween ephemera instead. 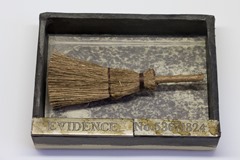 After picking my papers and decided what I wanted in each box, I started to put it all together (or at least the box vignettes). On the top row, I decided the broom was a bit of evidence (I think I was thinking of the Salem witch trials….). I distressed the evidence and exhibit number with some Mushroom alcohol ink. When setting the broom in the box I lifted it like it was on “display.’ 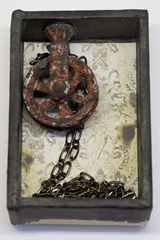 The second box is a rusty pulley wheel with a necklace as a chain. The rust paste (Finnabar red and brown) is a treat to work with but a little more difficult to put on a moving object like a wheel! The necklace was distressed with Mushroom alcohol ink and attached to the pulley. 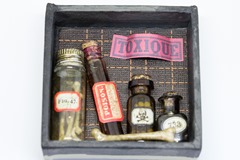 The third box is a set of apothecary bottles. I filled one with Tim Holtz Ideology bones. The bone on the outside of the bottles was distressed with Mushroom alcohol ink to give it a dirty, worn look. Sometimes I let the alcohol ink start to dry and then rub it so that it gives it a bit of a gloopy appearance. For the long thin bottle and the smallest bottle I used alcohol ink on the inside for color and a bit of dried liquid at the bottom and on the outside of all of the bottles I distressed them with Mushroom alcohol ink. I finished it off with the labels on the bottles and a ephemera piece. 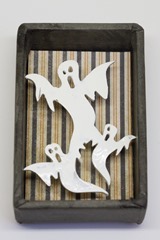 For the fourth box, I grabbed the TH Sizzix Bigs Ghosts die and some ideology shrink plastic. I picked up this trick last year and love it. It’s fun watching the plastic shrink! I also did it with the pumpkin on the bottom row. On the textured side of the shrink plastic I colored it with Snow Cap Alcohol ink. The width of the ghosts fit perfectly in the box. 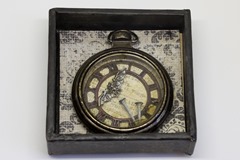 The pocket watch for the fifth box was lots of fun to figure out what I wanted put in it. I used Mushroom alcohol ink to distress it the outside of the pocket watch. On the inside, I lined it with paper from the paper stash. I distressed a Prima clock face by covering it with black gesso and rubbed it with Finnabar wax (fire red). Under the glass of the pocket watch it looks a bit rusted without the rusted texture. Inside the pocket watch I decided on a bat charm from the Funkie Junkie Boutique and some of the nails from the new Tim Holtz Vignette Hardware. 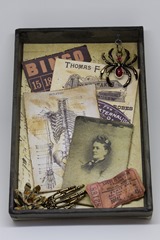 The sixth (and largest) box was developed with the thought of a bit of a gruesome end to it. I wanted to create the story of a date at the movies and bingo (a game of chance) that resulted in one of the partners having met a poisonous end by the other. The hand-bone charm acting like the hand with a corsage. I’m not sure if anyone will get the story but it helped me create an idea for the box. The hand charm and the spider came from the Funkie Junkie Boutique and the flower was cut using the Tiny Tattered Flora die. The ephemeral is from the Tim Holtz Halloween set and the picture of the lady is the back side of one of the papers in the paper stash. I distressed all of the ephemeral and used Vintage Photo ink to create brush/finger swipe of brown (kind of like dried blood). I added the spider and filled in the body parts with Stickles Christmas Red and let it dry. I used a screw from the vignette hardware to attach the spider so it’s hanging. 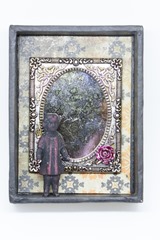 The seventh box is my mirrored girl. The little girl was a pain to gesso. I used an ink dauber instead of brushing the gesso on the girl to get better coverage and limited streaks. Once I managed to get that done, I grabbed some Finnabar wax (fire red) and gave her a brush of color. For the mirror, I cut out a piece of mirrored sheet and distressed it with mushroom alcohol ink. I used one of the foundry frames as the frame for the mirror. I distressed the frame with mushroom alcohol ink and then brushed it with Finnabair wax (amethyst magic). I added a heirloom rose that was inked with Mushroom and Wild Plum alcohol ink and attached it to the mirror. 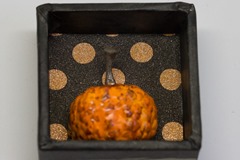 For the eighth pumpkin box I decided to use the metallic sheet paper from Tim Holtz as the background. I grabbed one of the pumpkin pieces and stumbled on a way to make them bumpy – all because I was trying to get the pain to dry faster! I used gesso on the pumpkin because I wanted to make it more Halloween orange by using the aptly named Tim Holtz Carved Pumpkin Distress paint. Well once the gesso dried, I painted and it and started to dry it with a heat tool. The pumpkin started to bubble and the bubbles stayed when it dried! I then took Mushroom alcohol ink and gave the pumpkin a quick over. 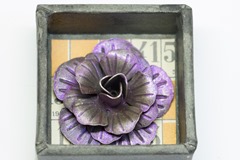 Box nine was a metal flower I found a while back and decided to use the Finnabar wax on it in the amethyst myst. I wanted to make my own metal flower but was running out of time and couldn’t find any thin metal. However, I have an idea in mind for a future project… 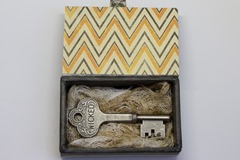 The box that is number ten is a hideway box. I used a manila tag inked with carved pumpkin distress stain, barn red distress ink, and rusty hinge ink and die cut out a “boo” using the new Tim Holtz Sizzix Thincuts Vintage Spirits. I created the “door” by attaching the paper to the box using the skull and crossbones designer tape and then created a small tab which would later blend into the edge of the configurations box. When you lift the little door there is some distressed cheesecloth (I rubbed the ink pad over the cheese cloth with the vintage photo distress ink). I added a Tim Holtz key in the box. 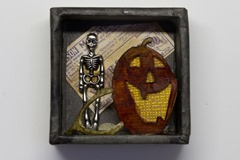 The penultimate box I added a bit of Halloween ephemera to the back of the box, distressed a wishbone from the Tim Holtz bottle of wishbones and added a skeleton adornment (it’s an old Tim Holtz pack). And, I added my other shrink plastic pumpkin. The die cut is the Tim Holtz Jack-O-Lanterns steel die from Sizzix. I colored it in terra cotta alcohol ink and covered the back of it with Mustard Seed paper that was brushed with Gathered Twigs distress ink. 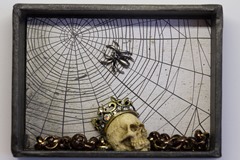 Little box number 12 feels like a bit of a Shakespearean moment – a Tim Holtz skull with a Prima Memory Hardware crown (French Regalia – Crowns I). I had to cut the crown in half (that was not particularly easy but I know that one my kittens will manage to find the other half somewhere in my craft room). I distressed another chain with Mushroom alcohol ink and finished it off with a spider crawling the web on the paper.

Now that all of my little boxes were done, I totally took an exit off the of highway I was on and went in a different direction than originally planned on my next step. But, I think the end product worked out. I had CTMH black frame shadow box that I received as a gift that had not yet been put to use. The depth of the shadow box wasn’t deep but I decided I wanted to use it. The configurations box was a teensy bit too big for it so I trimmed off the bottom and top edge and it fit into the frame. 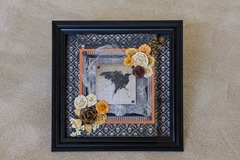 In order to finish the frame part, I used the skull and cross bones paper from the paper stash and trimmed the pieces to cover the bottom of the CTMH frame and the configurations book cover. So it looked like it was all one piece and not the two separate pieces. I wanted to continue with the blending of the frame and the configurations box by refocusing the eye on the square aspect of the main frame. Thankfully the configurations box is wide enough that I didn’t have to build the next set of squares into the lower parts of the CTMH frame. I cut a square in Spiced Marmalade, then one using the Tim Holtz Halloween paper stash (it was great to use that as the base size of 8x8), then a black metallic sheet from Tim Holtz, and finally another piece of Tim Holtz paper from the Halloween paper stash. I added a piece of cheese cloth for some texture.

The final square was stamped with the Blackbird from Stamp 68 (Spooky Stuff) with Distress Ink Black Soot. Then I added the metal pieces and the Prima Amber Moon flower sets along the diagonal. 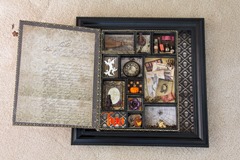 So, here’s my “tricked” out shadow box within a frame that you don’t really realize there’s a box there.

I hope everyone has a safe end of October and I hope this project inspires you to create something for the Frilly & Funkie challenge as well! 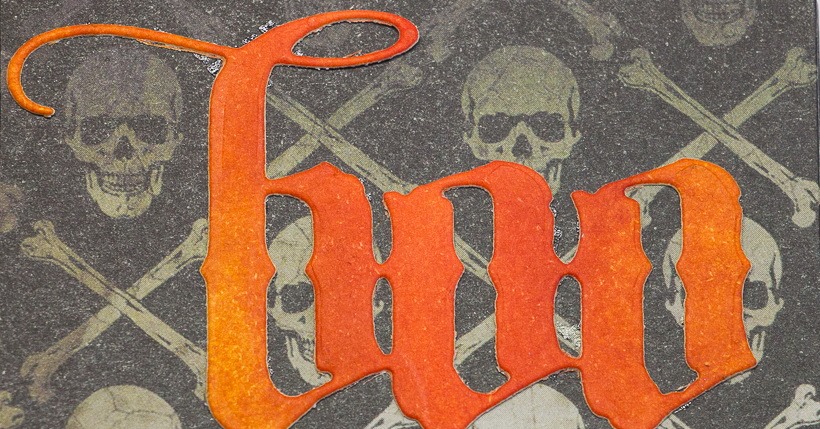 Saw your post at Frilly & Funkie, enjoyed it and thought I'd drop in. Really liked your assemblage box and your walk through of the piece. Tried to subscribe to your site but couldn't get the link to work, not sure why. If you have a simple solution let me know! Anyway, thanks for the post and the art...