Hello! I hope that everyone has started to ease into autumn. The trees are already starting to turn here and while it is a slow turn of color on a branch here and there, I’m ready for autumn’s cooler nights and crisper days. Autumn is my favorite time of year – the deep, rich colors; the beginning of regular baking going on in the kitchen; and decorating the house. There is always something about the comforting smell of an apple pie in the oven and the first set of cranberries arriving!

I am very happy to usher in Autumn with my guest designer spot on the Frilly & Funkie blog. The challenge is generously sponsored by Linda from the Funkie Junkie Boutique. Autumn, our lovely challenge host, asked us to go A Little Rusty! The challenge was to use rust or go for those colors of autumn. Since we just recently moved to a new house (at least for us!), I grabbed the rust paste, the rusty techniques, and my rustiness I set off to create my first big project in my new craft room (where I still can’t find anything and stuff still hasn’t been completely put away yet…).

This project really did take a mind of its own and isn’t at all like what I initially planned. Since last year’s version of the steampunk Halloween hat, I really did want to make another hat for Autumn/Halloween. I had such a great time making last year’s that my plan was to make another one. However, I hadn’t planned on making the hat just yet. I actually started working on a canvas for this project and then for one reason or another I started in on making what I’m now referring to as the 2017 hat. I have a couple of pictures of the process in the blog but got caught up in putting everything together that toward the end there are fewer photos. Sorry about that. 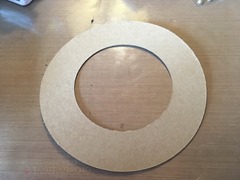 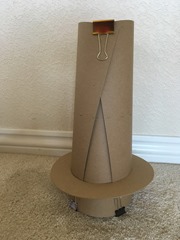 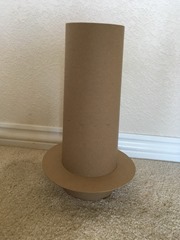 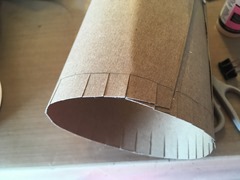 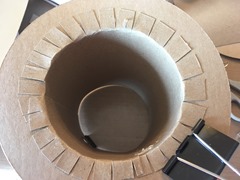 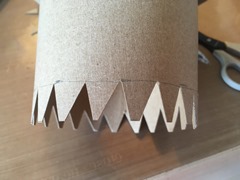 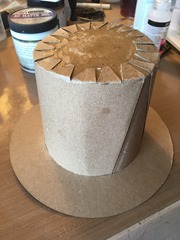 My first step was to create the chipboard version of the hat. Thankfully, my math geek husband was able to help me with this. The hat I wanted had a slight cone shape to it so I needed a little bit of help. I started with the base and then fit the inside, cone-shape inside of it. Once I managed that, I then decided where I wanted the zipper edges and the marbled orange paper as I wanted the look of the orange marbled colors to flow out of the brown leather paper. Once I put down the orange paper and the zipper (which was a bit difficult) next came the leather paper. In order to get the fit of the paper around the chipboard, we relied on string and a pencil to get the right fit! Once the leather paper was on the base, I started to work on embellishments. 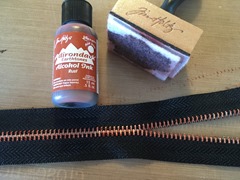 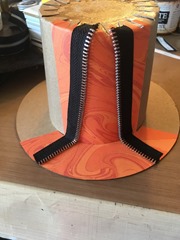 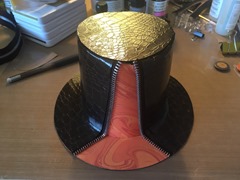 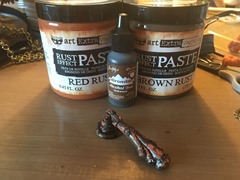 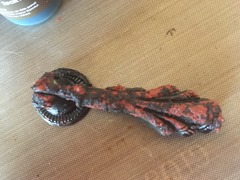 A couple of years ago, I found these little autumn seasonal picks at the craft store. I picked up several and they have been in the container on my craft room table since just staring at me. They even survived the move. As I was digging around for things to use for the hat, the sprig caught my eye and I decided to use it. Of course, I wound up taking it apart and then adding some rolled flowers to it. Next, I cut and dry embossed the leaves in the copper metallic paper.

I grabbed the archival cast piece from the stack of “extras” on my table and used it like it was a balcony of sorts. When I originally worked on it a while ago when I was just messing around and trying things, I used the Tim Holtz Distress Collage Medium (Vintage) to make it more yellow and brown. Next came the alcohol ink and all of the embellishments that needed to be darkened – the bottle, the skulls, the chain, the spider, the crown, and the door pull. I also used the Soft Matte Gel medium to protect the rusted bottle caps from leaving rust all over everything. 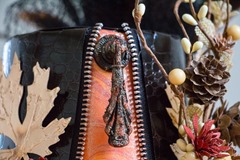 For the door pull, I pulled out the brown and red rust effect paste and made it look a bit used and old. Father time is starting to get older as we head toward winter, right? Later, and after it was dry, I added Wink of Stella Clear Shimmer to the door pull and to the orange paper to give it some iridescence and richness. I loved that the pen actually worked on the rust paste as it was a total experiment! 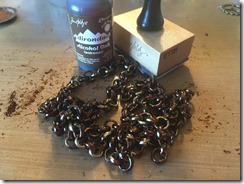 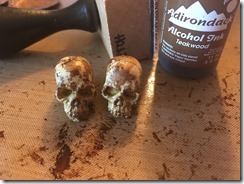 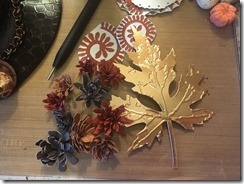 I then worked on all of the flowers and picked a light brown, dark brown, and reddish-brown color for the flowers. Once I rolled them and glued them, I placed them around the hat. I saved some for the back of the hat to add after I put in the fascinator. There are even little rolled flowers in the wires.

Next came the ribbon and the pheasant feathers pick to put in the back of the hat to give it some lift and height. I surrounded the ribbon join with several more of the flowers so to balance it all out.

I hope you enjoy this year’s hat. Again, once I got going on it I had a great time. This year’s hat is a bit more wild, less steampunk, and only a small hint of Halloween mixed in with the colors of fall. As the orange colors start to join your neighborhood (the orange paper), zip up the leather jacket (the leather paper), and gather the last of those mums (the flowers) before the freeze comes!

Thank you for visiting and I’d love to hear what you think! 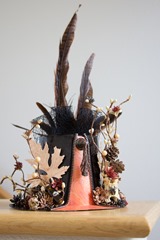 Items used for this project: 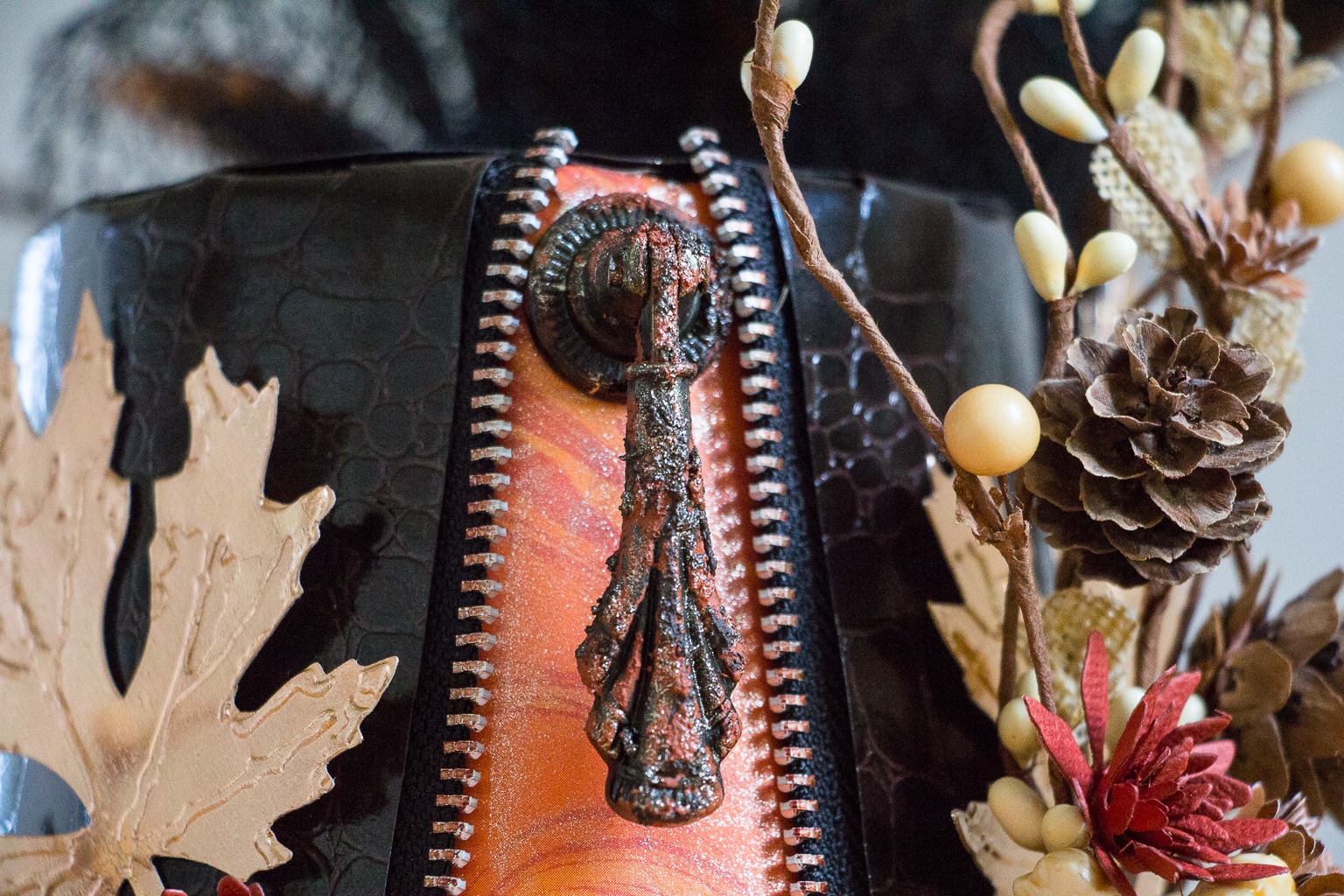 It's really just so beautiful! How clever of you and hubby to create such a design. I love that this is simple chipboard - how neat! Gorgeous embellishments and color palette. Thanks so much for being our guest. Hugs, Autumn

Creative plus! This is very cool.

What a cool hat you made! I love the leather and that rusted drawer/door pull! Great design and perfect for Autumn's Rusty challenge! Thank you for being our Guest Designer at Frilly and Funkie! Hugs! Sara Emily